“I felt my whole being vibrating. Like everything was in motion and they were taking the right place”

“During the healing I had a feeling that I was falling, but I said to myself “I trust these people; if I fall they will catch me”

“I felt a current of calmness, tranquility and infinite love pass through me. I have never felt anything similar before.”

“I felt like I was being touched by angels. Thank you so much! I really wanted to come and receive healing. You must come again soon”

Although we only quote few of the many experiences shared by the women who received spiritual healing by us and who participated in the meditation we did at the non-profit health center in Camden, these experiences are indeed indicative of the atmosphere that prevailed.

When the first discussions were taking place for us to offer – of course free of charge – spiritual healing and a meditation group at Women and Health, initially it was for us to be there only for one day, Friday June 10th. But once the center announced it, not only were all the appointments booked at once, a long waiting list was also formed. So we were asked by the heads of the Centre if we could add one more day, and the appointments for that day were also booked immediately!

Eventually, there were so many requests to which we of course responded happily, that we had eight spiritual healing appointments and a three-hour group of discussion and meditation both on the 10th and 11th of June. The groups were full and the attendees literally wanted to stay with us as much as possible in order to talk about their experiences from the meditation but also about personal issues they had.

“In meditation I felt I am united with everyone, I am spreading into infinity and I am not alone anymore”

“Really, do you teach all these things in schools in Greece? Children should definitely learn these”

We have been invited back to Women and Health and are in talks with the heads of the Non-Profit Organization to organize our next visit in September. 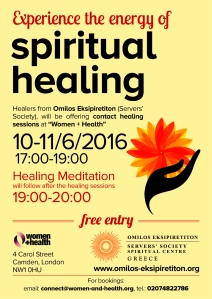